Osun State Governor, Ogbeni Rauf Aregbesola on Sunday lauded the choice of Otunba Gani Adams as the 15th Aare Ona Kakanfo of Yoruba land declaring that the Oodua Peoples National coordinator is worthy of the title.

The Governor, who spoke at the 50th birthday reception of  his Special Adviser on  Information and Startegy, Semiu Okanlawon in Iwo, Osun state said by the  appointment of the Arigidi Akoko born , Adams has become the generalissimo of both the seen and unseen yorubas ,home and abroad.

Ogbeni Aregbe who held the Aare Ona Kakanfo designate in a long embrace at first sight at the event said he shares many things in common with Gani Adams having lived in the same neighborhood with him in Arigidi Akoko in Ondo state..

Singing the praise of Gani Adams , the Governor said no choice could have been better than the one Alaafin of Oyo made in respect of the 15th Aare Ona Kakanfo adding that the choice is obviously very popular and sits well with the Yoruba people.

Eulogising the person of the latest Aare designate, Aregbe said "  I know his activities, I share a lot with him.

" He has become the generalissimo of seen and unseen Yorubas. You are worthy of the title, I salute you" he said. 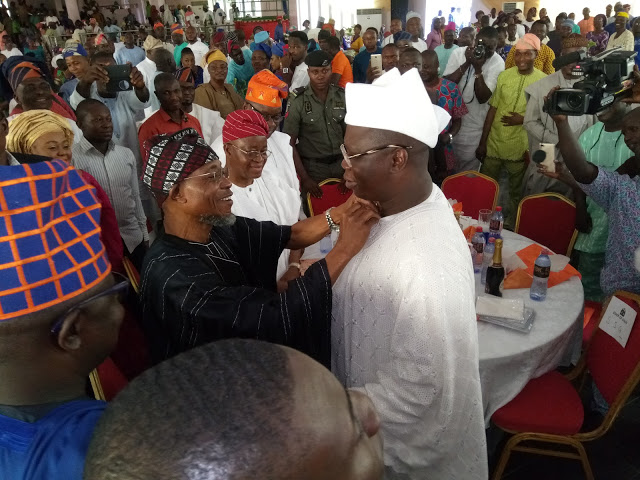