Justice Binta Nyako of the Federal High Court in Abuja on Tuesday ordered Senator Eyninnaya Abaribe, and two others standing as sureties for the leader of the proscribed Indigenous People of Biafra, Nnamdi Kanu, to explain the IPOB leader’s whereabouts.

Kanu who was granted bail by the judge on April 24, 2017, was absent from court on Tuesday when his trial was billed to commence.

But his three co-defendants were produced in court by prison officials.

Kanu’s lawyer, Mr. Ifeanyi Ejiofor, told the judge that Kanu had been missing after soldiers allegedly invaded the IPOB leader’s home‎ on September 14, 2017, adding that the Nigerian Army was in the best position to produce the defendant.

A lawyer, Mr. Ogechi Ogunna, appeared for Abaribe on Tuesday, informing the judge ‎that his client had filed a motion seeking to be discharged as Kanu’s surety.

‎The two other sureties, Immanuel Shalum Okabenmabu and Tochukwu Uchendu, were absent from court and not represented by any lawyer on Tuesday.

‎But Justice Nyako said Abaribe’s motion could not be heard until Kanu was produced in court.

One of the options was for Abaribe to produce the defendant in court and then apply to be discharged as a surety.

The other option the judge gave was for Abaribe to be ready to forfeit his N100m bail bond.

The third option ‎was for Abaribe to request to be given time to produce the defendant in court.

But Ogunna replied saying, “he (Abaribe) is not in a position to do any of these.”

However, the judge insisted tha‎t Abaribe must opt for one of the three options.

With the judge’s insistence, Ogunna opted to be given time to produce him.

The two other sureties were not represented I court on Tuesday.

Earlier, prosecuting counsel, Mr. Shuaibu Labaran, noting that Kanu was not present in court, urged the judge to revoke defendant’s bail, order for his arrest, and direct the defendants’ three sureties “to show cause why the bail bond of N100m entered into by each shall not be forfeited or they be committed to prison.”

The trial has been adjourned until November 20. 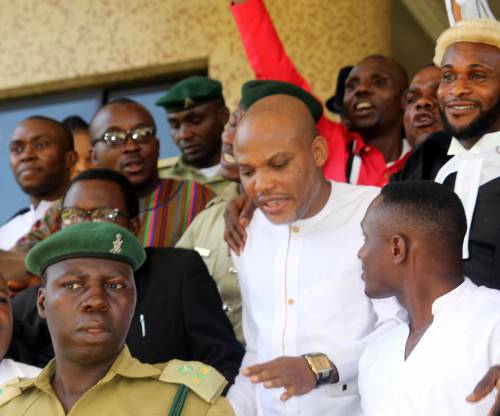