The Southwest Leader of Accord Party Dr Doyin Okupe spoke in Ilaro, Yewa South Local Government of Ogun State, during the official commissioning of the party secretariat in Ogun West Senatorial District.

Okupe explained that the Yoruba had strong advocates to defend their interest, but regretted that “there have been extreme silence and quietness” in the past.

He also said that the Nigerians had found “a better alternative” in Accord Party because it is
capable of leading Nigerians to the greater height.”

He described All Progressives Congress (APC) and the Peoples Democratic Party (PDP) as dead political parties, which have nothing good to offers Nigeria.

The former Presidential Spokesman added that the party would provide a veritable platform for the youth to contest and win political offices.

Okupe said Accord Party in Southwest is rising to that occasion, to defend interest of the Yoruba people.

While describing: “Those that are still joining PDP, APC are like those who visited the graveyard in search of Jesus Christ. Jesus has risen from the dead. PDP and APC belong to the graveyard. They cannot produce anything good for the country anymore.”

He said, “Accord Party was established for three reasons. One, we believe only the young people, the new people and the new generation of Nigeria who are unadultrated, who are immuned to corruption, who have zeal, ability and agility to serve Nigeria.

Okupe boasted that Accord Party would defeat the ruling party both at the federal level and Ogun State come 2019 elections.

He said, “Who believes David would defeat Goliath? By the grace of God Accord will defeat Goliath of APC and Samson of PDP,” he said.

In his address, Ogun State Leader of Accord, Elder Isiaka Amusa said the party had decided to pick it’s governorship candidate from Ogun West with a view to realising the dream of producing a governor since 1976 when the state was established.

He, however, warned the people to be determined and resist their leaders who according to him had sold out the zone in previous election “in the name of money politics.”

Adewale said it is high time they rallied round a Yewa candidate to emerge as governor come 2019. 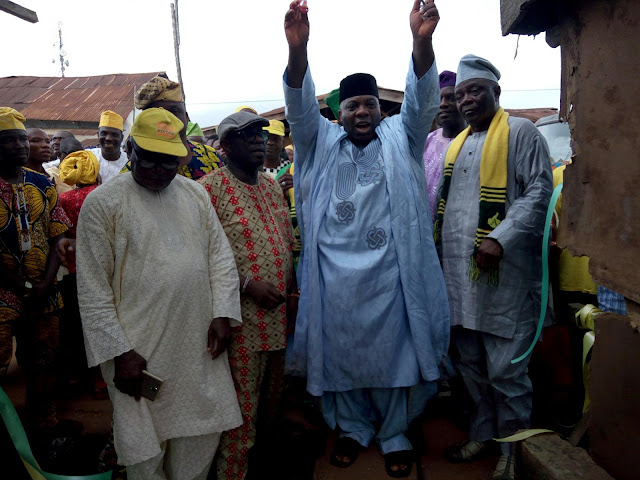