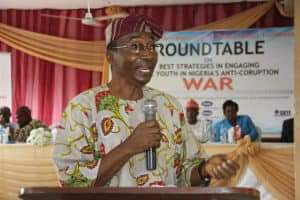 The youths have been admonished to come together and foster a fight against corruption in Nigeria, in order to sustain a securing future for the upcoming generation and the nation as a whole.

Making this statement, was the Constitutional lawyer and anti-corruption crusader, Dr. Tunji Abayomi, during the Sustainable Development and Transparency Foundation (SDTF) round-table on ”Best strategies in engaging the youth in Nigeria’s anti-corruption war” held on Wednesday at the Nigerian Institute of Journalism (NIJ), Ogba, Lagos.

Abayomi, said that the corruption issue has been a long time was that needs urgent solution in order to protect the future of the country and the upcoming generations.

"The greatest effect of corruption is underdevelopment and mal-development. The promises and possibilities for growth and advancement in every sector of the economy is diminished if not made impossible by corruption.

"The effect of corruption in Nigeria is apparent in the low standard of living, high unemployment, absence of public and societal access to health, road, water, education, as this is a country that has made trillions of dollars as the richest West African nation since independence"

He added "It is estimated that not less than 80% of National population live serious poverty, while the remaining 20% live in abnormal affluence and in some case embarrasing opulence" 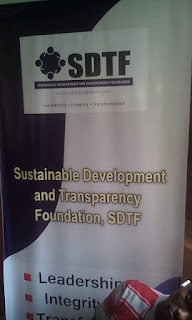 "The war must be made a people's war in the special interest of the people if it is ever going to succeed. If the war against corruption becomes the war of the people for their interest, then we must ask a follow-up question. How do we fight the war?

"In my view, we can learn from past experience. The most recent experience which I am most familiar with is the war against military dictatorship. Now, no war is fought by all the people nor is victory dependent on the number of believers" he added

In her remarks, the President, Nigerian Guild Of Editors and Editor-in-chief, The new Telegraph Newspaper, Mrs Funke Egbemode called on Nigerian youths to Fight corruption by making the right choices during elections.

According to her, people who will take care of Nigerians and ensure progress should be voted for, not those who will pay people to vote for them.

The Chairman, Nigerian Union Of Journalist (NUJ), Lagos State chapter, Dr. Qasim Akinreti who was also present at the event stressed that corruption is not all about stealing money, adding that examination malpractice is also a form of corruption.

He also urged Nigerian youths to restructure their minds and souls against corruption and stand for the right things in order to change Nigeria for the better.