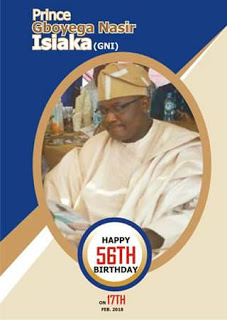 Q: Happy birthday GNI and how would you describe life at 56?
A: I will say, without hesitation that life has been fair to me and really, I only have to appreciate my creator for how far He has brought me. As it is common to all men, life will present to you measures of the good, the bad and the ugly, but it is how you rise up to the challenges that comes your way that will determine what becomes your fate eventually. So for me, I have had my fair share of life challenges and at this juncture, I have a good story to tell, despite my humble beginnings.
Q: Specifically, has life been fair to you in terms of your family, career, health, politics and so on?
A: Well, a philosopher once said that the secrets of men are in their stories; and for me, I have come a long way and have many stories to tell. I come from a humble background, growing up in Imeko, where I spent the first sixteen years of my life before venturing out to pursue higher education. Those periods had its peculiar challenges but I was focused on the future I desired; and that was enough motivation for me. Also, going to the 'Great Ife', now Obafemi Awolowo University, where I Obtained a first class degree in Accounting, presented a lot of challenges in terms of the new environment, academic rigour and needed support structure which was not readily available; but in the end, I came out with top honours through focus and determination. This became the foundation for subsequent academic attainments and a career path that traversed the banking sector, stockbroking and Investment management at both private  and public sector levels. I am also involved in politics and I am still very active in it. In all of these, it wasn't easy,  as they say,  but I took what life threw at me and made the best of scarce opportunities. I have enjoyed very good heath and have the benefit of a good, stable family. For these two specifically, I thank God. 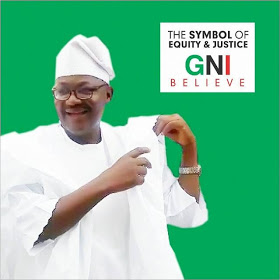