It was like a carnival earlier today in Ado Ekiti, the Ekiti state capital when Akogun Banji Ojo moved a step further for the actualization of his dream to occupy the governorship seat at Oke Ayaba after the July 14 2018 election by making his intension known officially to the Party, Accord both at the National, State and Local government levels. Akogun Banji Ojo Campaign organisation led by its Director General Chief Ade Ayeni converged at Omolayo area along Ikere road, Ado Ekiti as early as 11am.
Th 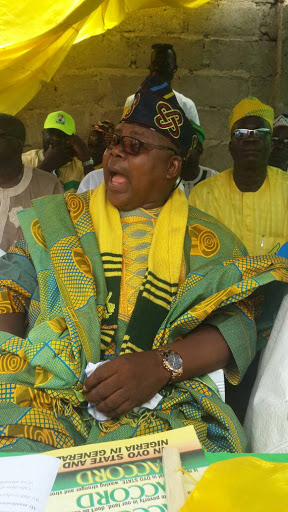 e convoy of ABO Ekiti 2018 of not less than 200 vehicles moves majestically through the major road of Ado Ekiti amidst waves and jubilations from Ado Ekiti residents. The over seven kilometers movement caused serious traffic gridlocks but all security apparatus were put in place to forestall breakdown of laws and order. A popular musician supported by boys brigades added glamour to the show. 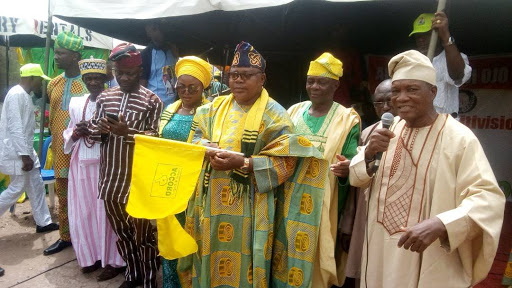 The yellow coloured flag of Accord were being waved and displayed by all and sundries. Ado Ekiti stood still for the historic declaration. Monmouth crowd was on ground to welcome the entourage at the party secretariat along Iworoko road, where the declaration took place. People from all walks of life were in attendance to witness the declaration.
The National leadership of the party was led by Prince (Dr) Doyin Okupe while all the six South west Chairmen of the party graced the declaration among who are: Elder Isiaka Amusa of Ogun, Dr Ambode of Ondo, Alhaji Mudasiru Ogunsola of Oyo, Chief Gbenga Cole of Lagos, Otunba SEGUN Fanibe of Osun and the Chief host Chief Samuel Abiola Odeoba among others. Presenting the aspirant Akogun Banji Ojo and his letter of intents to the state Executives, the DG of ABO Ekiti 2018 Chief Ade Ayeni thanks the entire Accord family for given his candidate the opportunity to express his interest to contest the forthcoming Ekiti governorship election on the party's platform.
The state chairman of the party Chief Samuel Odeoba while receiving the aspirant on behalf of the state Executive council promised to work assiduously for the success of the party at the polls. All the southwest states Chairmen of the party spoke gloriously about the personalities of the aspirant and his dodged commitment to get positive results despite all odds. they expressed their total support in whatever form for the success of the party at the polls. 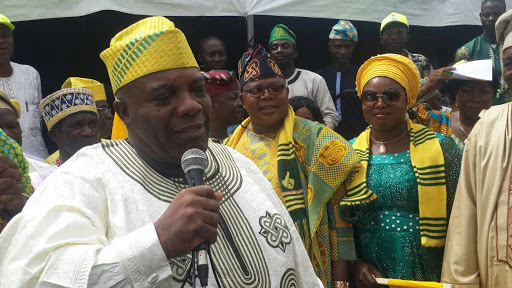 In what looks like a Prayer warriors gathering, the National leader of the party Dr Doyin Okupe personally led a Special prayer session for the success of the candidate and the party at large. Speaking further, from the realm of the spirit, he has foreseen a situation where Akogun Banji Ojo and his team occupies Ekiti state government house. He told the gatherings that the present occupiers of Ekiti government house - Gov Fayose and his group have had their time and that Fayose cannot give Ekiti people his Unfitted extra tyre in person of Kolapo Eleka as governor. He implored Ekiti people to embrace Accord as the only option for the liberation of Ekiti state from the present political and economic shackles.
However, in the native language of Ekiti people, the aspirant, Akogun Banji Ojo thanks the party at all levels for their supports. He pledge to pursue and implement the party's manifestoes faithfully if given the mandate. The Agric revolutions shall be given utmost priority thus: 100,000 hecters of Cocoa plantation within 3 years across the state, Igbemo Ekiti Rice revolution, Banana/Plantain farms at Ilawe and other towns and villages in the state; Free Education on ICT, Social security for the aged, Establishment of Five agric based cottage industries across the state within four years; Youth Empowerments/ Human Capital developments and lots more as contains in our manifestoes and Blue Print/Master plan. He equally encourage all eligible voters to get their voters card, guide it jealously and must not allow fraudulent politicians to purchase it from them with money. There were merriments and musical galores all throughout the periods the event lasted. It was indeed, Mother of all declarations.
By Unknown on March 31, 2018