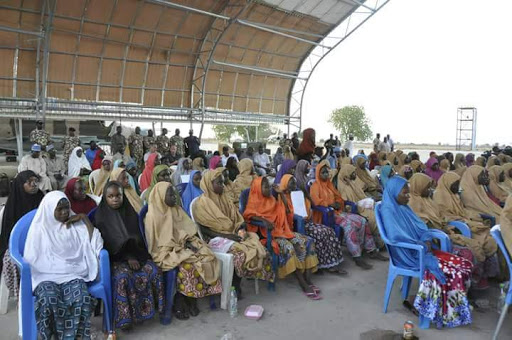 Sources said the girls, heavily guarded by security forces, were taken to Maiduguri by road to the warm embrace of a Federal Government delegation.

“They left Dapchi after they met with their parents and acquaintances; many parents trooped to Dapchi from surrounding villages to catch a glimpse of their daughters.

“They arrived at the Air Force base in Maiduguri around 5pm where they had their lunch before they were airlifted by a military aircraft to Abuja.

“They would most probably meet with President Buhari today because they don’t have much complications; only fatigue because of stress and anxiety,” he said.

Daily Trust reports that President Buhari is also expected to visit Zamfara State today, so it is not certain whether the president will meet them before or after the trip.

“The presidency is also planning to subject them to counselling, the essence is to disabuse their minds because the Boko Haram told them never to go back to school, they were told to go and marry,” another source said.

The girls arrived Maiduguri at about 4:45pm along with some of their parents after a brief medical check-up at Dapchi General Hospital .

Leader of the delegation Minister of Interior, Gen. Abdulrahman Dambazau(rtd) led the Federal Government delegation to receive the girls at  6:30pm at NAF Base in Maiduguri yesterday.

The Inspector General of Police and top military officers were also there.

Earlier in the day in Dapchi, parents and residents jubilated at news of the return of the girls after a month in captivity.

Parents and residents in the town told Daily Trust that the girls were released to them voluntarily by the insurgents, around 8:18am.

They drove in a fleet of eight vehicles, and drove out of the town after half an hour of preaching to the residents that came out to receive the children.

Abba Musa, alias Shago, a resident, said: “They asked if people in the town were not happy that they have returned the school children and we said “We are all happy.”  They pleaded with us to help them replace their punctured tyre and we gladly changed the tyre before they zoomed off.

“They looked at me and said “Your hair cut is haram. As a Muslim you are supposed to grow beard like ours not Balotelli haircut.”

They made an offer that anyone willing to join the service to Allah should follow them, but no one did”, he said.

One of the freed schoolgirls, Khadija Grema, said they were about to break their Monday fasting on the fateful day that the insurgents struck. “We were cramped in a TATA truck under the pretence that they were rescuing us and drove into the bush. We were shouting for help but nobody came to our rescue as we continued the journey into the bush, they asked for those among us that were fasting, they served us food and drinks after which we observed our prayers.”

She said five of the schoolgirls died while in captivity.

“As we continued the journey, we crossed several rivers and streams before we arrived at a big house where they kept us until the day of our departure. They gave us enough food; we were not harassed or molested.”

When asked about the identity of the insurgents, Khadija said they were kitted in military uniform, speaking only Kanuri and Arab languages.

One of the parents, Malum Yerima, said he had not seen his daughter and that nobody confirmed that the daughter was part of the released girls.

“Let the military allow us to see and talk to our daughters. It will be a relief for us, especially the women that are in shock or even fainted.”

The chairman, Dapchi abducted schoolgirls association, Bashir Manzo, said he saw his daughter and was very pleased with President Buhari’s administration for that.

“He promised that the girls would be returned to us soon and in good health. Today we all believed him to be a man of his words. Also, we must thank all those that supported us in the difficult times”, he added.

The parents of the five students that died and the mother of the only Christian girl that refused to denounce her religion were in shock and in deep sorrow.

One of the parents, Adamu Jumbam told our correspondent that the death of his daughter was a great loss to the family but that it was what God has destined.

The mother of the girl that refused to denounce her faith, Mrs Rabecca Shurabu, who fainted upon receiving the news that her daughter was not released, pleaded with President Buhari to facilitate the release of her daughter.

“This girl is the only thing I have; I want President Buhari to act fast and get my innocent daughter from these people. They (insurgents) should understand that the prophet of Islam had allowed people to practise their faith because there is no compulsion in Islam,” she said.

The Chibok girls parents, who went a day earlier’ to Dapchi, witnessed the release of the girls and returned home with mixed feelings.

Chairman of the abducted Chibok Girls Association, Mr Yakubu Nkeki, appealed to Boko Haram militants to extend similar gesture to the Chibok Girls that are still in captivity. We also called on the relevant authorities to mediate and see to the released of our remaining children.

“We are both victims of the same circumstance and our visit to Dapchi was meant to unite and fight for the release of the girls still being held hostage by the insurgents” he said.

Work by the DSS and other intelligence agencies ‎ paid off with the release of the Dapchi school girls, Daily Trust has gathered.

The release took high level collaboration between the intelligence agencies to swiftly contact the terrorists and negotiate the release of the girls.

Daily Trust was unable to determine the terms of the release at the time of filing this report.

However, security sources hinted that the terrorists may have been satisfied with their negotiated demands before agreeing to release the girls.

The source said the group may have not been paid in monetary value but in other logistic terms.

It was said that possible prisoner exchange, medical supplies and other logistic supplies may have been exchanged for the girls, even though the government is not saying so.

Daily Trust could not get a comment from the DSS to confirm this report as the service does not have a spokesman.

Earlier in an interview he granted yesterday, Minister of Information and Culture, Lai Mohammed had said the only condition given by the insurgents was that they would return the girls to where they abducted them. “So in the early hours of today, they did return the girls and most of them went to their parents homes.

“The report we got was that one condition the insurgents gave was that they will be the ones to drop the girls and they dropped them in the early hours of this (yesterday) morning.

Amnesty International (AI) has insisted that the Nigeria authorities investigate the security lapses that caused their abduction, while the #BringBackOurGirls (BBOG) said it was delighted at the return of the 104 Dapchi School girls but promises to interrogate the circumstances surrounding their return.

It also said it is saddened at the five reported to be dead and one still held captive with the insurgents.

The prompt release of the Dapchi schoolgirls is another solid demonstration of the political will of the President Muhammadu Buhari-led APC administration to secure the lives of all Nigerians, the National Publicity Secretary of the ruling All Progressives Congress (APC), Malam Bolaji Abdullahi has said.

Malam Abdullahi, who said this in a release signed and issued yesterday in Abuja, stated that the APC was delighted with the news of the return of the schoolgirls abducted from Government Girls Science Technical College, Dapchi, Yobe State by Boko Haram.