The Lagos State Police Command Spokesman, SP Chike Oti, while confirming the arrest of the policemen on Tuesday said the suspects — two Inspectors and three Sergeants –were SARS operatives attached to Ipakodo. 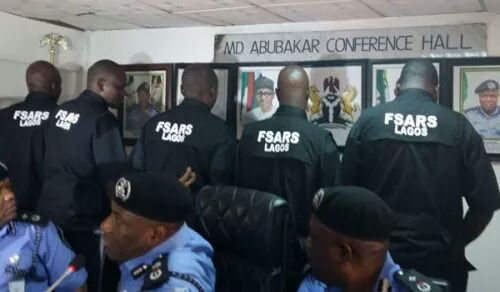 Oti told newsmen that the men were not operatives from the Federal SARS, Ikeja Unit as reported.

He, however, said that one Insp. Jude Akhoyemta, who was earlier mentioned in the matter among suspects, was found to be innocent.

“In line with the directive of the Commissioner of Police Lagos State, the Command hereby informs the general public that further enquiry into the allegation of harassment of one Immanuel James Ibe-Anyanwu by SARS operatives at Ago-Palace way, Okota revealed the true identity of officers involved in the highly regrettable incident.

“Those involved are currently undergoing interrogation at the Command’s X-Squad Section and would be marched before an Adjudicating Officer at the Police Provost Department for the commencement of their orderly room trial,” Oti said.