The Ogun state police command have arrested the Pastor-in-charge of Holy Gathering Evangelical Church of God, Elijah Oluwatobiloba, for allegedly killing his lover and burying her body inside his church in the state. 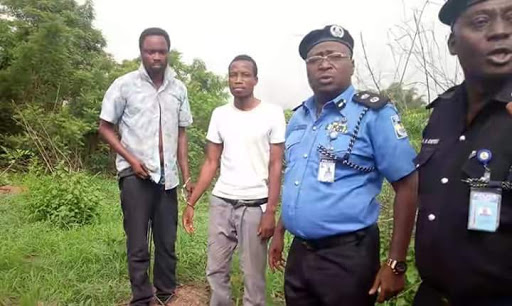 The suspect, upon interrogation, claimed that he carried out the heinous act for reasons known to “him and God”.

The Commissioner of Police , Ahmed Iliyasu , said the command had received a report of a missing person.

He said that the case was reported by one Adebola Saheed , who stated that his younger sister, Raliat Sanni , 35 , had left home since March 21 and had yet to return.

He said the pastor, after discreet analysis of facts , was the last person who was seen with the missing person.

In the course of interrogation , he confessed to killing the victim and burying her inside his church after removing her head and two hands.

He said further that Sopeju led seven members of an occultic group to his house with the aim of luring him to become a member.

Elijah who claimed to be a teacher at Methodist High School (Private), Arigbajo, in Ifo, said the group ordered him to submit names of his church members and eventually picked the deceased name.

He said, “It was not true that I killed a woman, it was one Sopeju and a woman wanted to make me join their occultic group and they said that they are going to collect a ransom.

So they collected the names of my members and picked the name of Raliat. Having mentioned her name, they asked me where she was living and I told them she is living at Wasimi. They later got her and brought her to my church.

Sopeju brought out a knife and beheaded the woman and after beheading her, he collected her blood and put it in seven calabashes”.

When asked to react to the allegations, Sopeju denied all said by his friend but admitted they all belonged to white garment churches in the area.