Sapele – Nunu Allround, the 30 year old mother of two who slit the throat of her ex lover Obagie Ikede, 32 yaer in Sapele, Delta State has denied the allegation that her action was as a result of Ikede’s insistence on ending their five months old love affair. 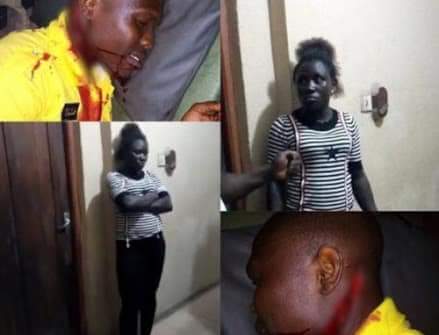 Nunu who spoke to News Waka Now Blog from her hide-out said: ‘all what Obage said was not true, though we have been dating for five months as claimed, Obagie has been treating me bad and I have been enduring so many abuses from him, who was looking un-kept and visibly distressed.

She added that though they had been having problems they had a way of settling it. We loved each other and it was never intentional that this happened. He slapped me and I was angry. The razor blade was not meant to harm him, I had actually bought the razor blade to cut my nails but when he came shouting angrily that I had reported him to his mother, which led to him slapping me, I attacked him out of provocation. I am sorry for what happened. It is the devil’s handwork. I want Obagie and his family to forgive me. I still love him and I am sure he loves me too,” Nunu pleaded.
By Unknown on April 02, 2018