Former President Olusegun Obasanjo yesterday said that Nigerians were poorer and more divided under President Mohammadu Buhari and the All Progressives Congress (APC) than ever before. 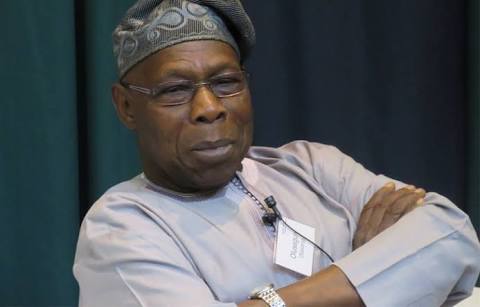 Obasanjo also announced the adoption of African Democratic Congress (ADC) as the political platform for his Coalition of Nigeria Movement (CNM) to contest the 2019 general elections.

He declared that the ADC, which is among the 68 registered political parties in the country, would bring about desirable change in the nation’s polity, consolidate democracy and stop the re-election bid of Buhari.

Obasanjo, who spoke at a press conference in Abeokuta, Ogun State, warned Nigerians against joining or voting for both the ruling APC and opposition Peoples Democratic Party PDP) in forthcoming elections.

He accused the APC of gloating and revelling in unrepentant misgovernance and taking Nigerians for fools while also upbraiding the PDP for merely offering apology without disciplining those who set the country on a course of ruin.

He explained that the leadership of CNM, which he founded, agreed to adopt ADC after detailed examination, wide consultation and bearing in mind the orientation, policies and direction of the movement. In his address titled: “My treatise for future of democracy and development in Nigeria,” Obasanjo said though he would not join the party based on his earlier vow not to play partisan politics, but he would continue to be “alive and active on Nigerian and African issues and interests” and also offer necessary advice.

The former president, who spoke extensively on the nation’s politics, called on the Independent National Electoral Commission (INEC) to ensure strict control of campaign funding and transparent accounting of all funds utilised by individuals and political parties for campaigns.

Obasanjo accused the Buhari administration of dividing the country by “playing the ethnic and religious game,” adding that the nation had also been more insecure and unsafe for the citizens.

He said: “I will advise others to join this political party platform (ADC) to usher in a new dawn for Nigeria, but I may not be able to advise anybody to join PDP or APC no matter what window-dressing reformation they may claim.

“Although PDP would seem to have realised its mistakes of its immediate past of the last eight years or so, its present evolution would, by itself, not give confidence to well-meaning Nigerians who are interested in a new Nigeria in the hands of God that will have leadership, governance, development and values within our culture as its guiding principles with the attributes of honesty, integrity, patriotism, love, unity, industry, incorruptibility, good neighbourliness, faithfulness, trust, courage and love and fear of God held aloft.

“PDP offered apology without disciplining those who set Nigeria on a course of ruin and some of them are still holding leadership roles in their party. Nigerians may forgive, but Nigerians should never forget; otherwise they will be suffering from amnesia and the same ugliness may raise its head again. “APC, as a political party, is still gloating and revelling in its unrepentant misgovernance of Nigeria and taking Nigerians for fools.

There is neither remorse nor appreciation of what they are doing wrong. It is all arrant arrogance and insult upon injury for Nigerians.

“Whatever the leadership may personally claim, most Nigerians know that they (Nigerians) are poorer today than when APC came in and Nigeria is more impoverished with our foreign loan jumping from $3.6 billion to over $18 billion to be paid by the present and future generations of Nigerians.

“The country is more divided than ever before because the leadership is playing the ethnic and religious game which is very unfortunate. And the govcountry is more insecure and unsafe for everybody. It is a political party with two classes of membership.”

While acknowledging that good men and women are still within the APC and PDP, Obasanjo noted that “what must be done is to take what is best from all to come together on a new alliance platform that will take us to the promised land.” He said: “It is pertinent to make the point that PDP and APC are not actually made of men and women who are totally evil.

There are sprinkles of good men and women out there and among them.

But as political parties and the government they led or they are leading in the last 11 years, they have failed and failure should neither be hoisted for embracement nor reinforced.

“Nigerians must keep their eyes wide open, their ears quite attentive, their minds very clear, their hands very clean and must not remain dumb in the face of atrocities and impunities of the governors against the governed.

“Those who govern us at all levels must be made to realise that it is our collective rights and sovereignty that they hold in trust for us and to be used for the good of all of us and with all of us having interest and having a stake in how we are governed. It is our God-given right and we must not allow the abuse of it.” Also in Abuja, the Leader of CNM, Prince Olagunsoye Oyinlola, at a world press conference, said the decision to move in the ADC was an appreciation of the progressive credentials of the party since its formation and entry into the nation’s politics.

“You will all recall that in January this year, the Coalition for Nigeria Movement, CNM, was formed by some of us across the country as a political platform to create a new generation of leaders for our country.

According to Nwosu, nation building could be a very daunting exercise but with good and committed leaders, the journey could be much easier.

“Today, our great country with 200 million population is in a dysfunctional state. Our biggest resources in human capacity and diversity seem to be weighing us down and tearing us apart.”