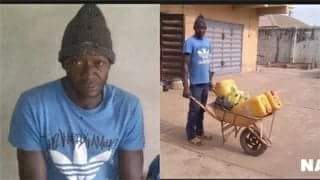 - He died on Sunday, May 6, in Ijagbo, Kwara state and he has been buried in Islamic rites

The family of late former Super Eagles star Rashidi Yekini have been thrown into another mourning following the untimely death of Akeem Yekini.

Akeem Yekini, 36, who was one of the two surviving brothers of Rashidi Yekini died on Sunday, May 6, according to the report reaching newswakanow.com.ng from a family member.

A family member named Tajudeen confirmed to newswakanow.com.ng on Tuesday afternoon, May 8, that Akeem was rushed to the General Hospital in Ilorin on Saturday, May 5, before he died the next day after returning to his base in Ijagbo which is a town in Kwara.

''He has been sick for a while, but last Saturday, he was in a bad condition in which we had to rush him to Ilorin where he was treated and we returned the same day.

''But on Sunday morning, he started coughing seriously and vomiting blood, and before we knew what was happening, he died in the process and he has been buried,'' Tajudeen explained to newswakanow.com.ng.

Unlike his elder brother Rashidi who played for the Super Eagles scoring 37 goals, Akeem also chose football as his career, but he never succeeded until he died.

His dream was to play in Europe or America, and in the process, he had numerous trials in Brazil and Denmark, but he never signed for any club.

His ordeal began after the death of his late brother Rashidi Yekini who died on May, 4 2012, as Akeem had no other means of livelihood than to go into laboring.

He was called for a trial last two years by Gateway FC and Shooting Stars of Ibadan, but Akeem claimed he was having a serious ankle problem which stopped him from playing.

Until his death, Akeem Yekini was living together with his mother in Ijagbo, Kwara state, and he is survived by two daughters.