As "Ramadan" a compulsory 30-day fasting period for the Muslim faithful begins, Engr. Dada Kolawole Oduntan aka "DKO" who is an Abeokuta South Federal Constituency House of Representative hopeful urged Muslims to be  resolute, love one another and pray for peace. 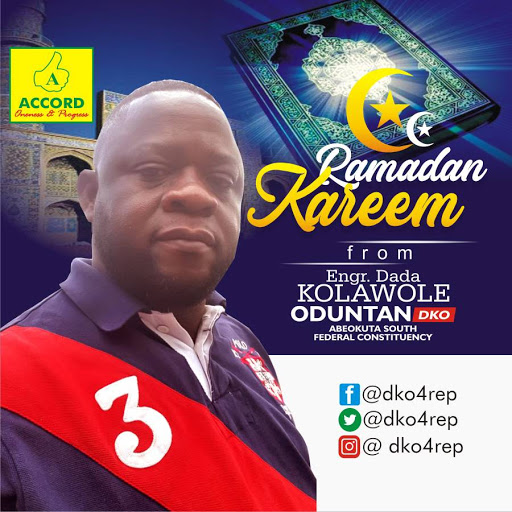 Engr Dada Kolawole Oduntan  also urged the Muslims faithful to always abide by and practice the lessons of Ramadan which include self-discipline, giving alms to the poor, self-denial and perseverance among other traits as contained in the principles of Islam.

He also admonished Muslims to cultivate the habit of forgiving one another, being friendly to their neighbours especially the needy during and after the period of Ramadan.

According to Engr. Dada Kolawole Oduntan - the Holy Month of Ramadan is a period which should be used to appreciate God’s love for humanity and therefore “Muslims must do away with all acts that contradict the expected behaviour of devoted Muslims and promote friendliness, hope and love among the people.

He also reminded Muslims to be guided by Islamic principles in all their actions and not limit their faith to the lessons of Ramadan alone but be guided by the teachings of Prophet Mohammed (SAW) as laid down in the Holy Qur’an.