Some Lagos-based legal practitioners on Thursday, called for a reform of the Justice system and the various provisions of its laws in order to enhance the Nigerian judiciary. Chief Judge of the Federal High Court, Justice Abdul Kafarati The lawyers told news men in separate interviews that the Nigerian legal system had been mired by many challenges ranging from applicable laws to their implementation. 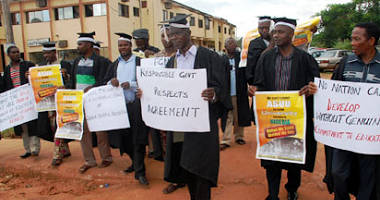 They held that a review was now imminent and called for an overhaul of the legal system. A constitutional Lawyer, Mr Spurgeon Ataene, described the judiciary as embattled, especially with episodes of invasion of the homes of judicial officers, which had left a sour taste. “The arraignment of some judges is indeed a sad commentary for the judiciary; the Chief Justice of Nigeria (CJN) should evolve and articulate policies that will fortify the judicial arm of government,’’ he said.

Ataene called for an interface with the arms of government, in order to avoid serious conflict. “It is important for the CJN to interface with the executive and legislative arms of government in finding effective ways of resolving conflicts, rather than exposing the judiciary to needless public ridicule. “More so, it is important for Judges to deliver on their mandates, and endeavour to reduce the burden of justice on the citizens and not being overbearing,” he said. He also called on the CJN to restore the past glory of the judiciary. In the same vein, a lawyer and rights activist, Mr Anthony Makolo, called for the downward review of the cost of filing processes in court, to reduce the burden on the common man. “Prisons are exploding in population daily, and judicial officers are partly responsible for this.

“Judges and Magistrates should be bold in the interpretation of the law. “The Administration of Criminal Justice Law, must be strictly complied with to the latter, so that once the 60 days window lapses and no information is filed against an accused, a judge or magistrate is duty bound to set such accused free,” he said.

He said that applying the law with restraint had been the bane of justice delivery, adding that it should be discouraged. On his part, another rights activist, Mr Ogedi Ogu, clamoured for the judiciary to take a bold step in tackling the evident challenges in Nigeria’s criminal justice system.

“For instance, the judiciary must invoke its powers on statements obtained from suspects by way of torture, and inhuman treatments. “It is only when the judiciary takes a bold step and out rightly rejects such practices that those saddled with the responsibility of investigation would find other means of obtaining statements without inhuman treatments,’’ he added. Ogu urged judicial officers to be true administrators in the temple of Justice, and help restore the country’s judicial integrity. (NAN)