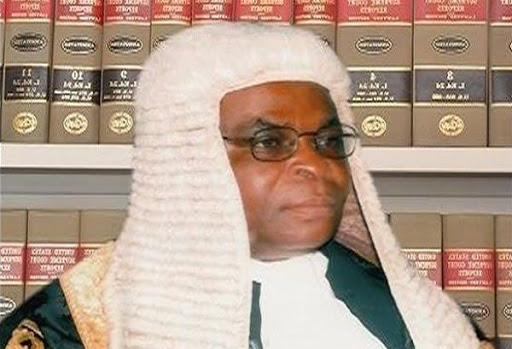 As reactions continue to trail the suspension of Justice Walter Onoghen as the Chief Justice of Nigeria by President Muhammadu Buhari-led government, some lawyers and civil society organizations have vowed to mobilize over 220 million Nigerians against the reinstatement of the embattled CJN.

The groups said any attempt to reinstate Onnoghen would bring the nation’s judiciary into ridicule before the international community.

Lawyers of Conscience, CSOS, Professionals Without Border and other group commended President Buhari for taking the anti-corruption fight to the judiciary arm of the government.

Princess Ajibola Esq, Convener of the group urged the federal government not to bow to the pressure from the opposition parties and few Nigerians who are not happy with the ouster of the billionaire CJN.

Speaking at a world press conference on Saturday in Abuja, Ajibola said the entire war against corruption would be meaningless if the judiciary continues to remain rotten since the conviction rate has remained dismal even though many suspected corrupt persons have been arraigned

His words, “Since even corruption has company, expectantly, there have been reactions to this development. The preponderance of reactions has been that the suspension of the former CJN to pave way for a fair trial of his case at the Code of Conduct Tribunal and to save the judiciary from disrepute is a step in the right direction.

“The judiciary had in the last two weeks been at its worst as those over whom Justice Onnoghen had powers were coerced into delivering one ridiculous ruling after another in the attempts to shield him from standing trial.

“However, a narrow but fierce minority has launched a campaign to muddle the issues and create the impression that the removal of a CJN that wilfully violated the laws of Nigeria is a rape of democracy.

“It is instructive that this narrow minority is led by the opposition People’s Democratic Party (PDP), whose members have been the greatest beneficiaries of the baffling Supreme Court rulings that were procured while Onnoghen was still in office. Members of the same party had also been reported to be banking on a Justice Onnoghen-led judiciary to sell election victory to them.

“May we also note that the lynch mob that have been criticising President Buhari have added the Nigerian Bar Association (NBA) as their choristers, with Senior Advocates of Nigeria (SANs) taking on the role of back-up singers. It is simply ridiculous when we are reminded that even the current leader of the association has a case of money laundering pending before a competent court, which makes a corrupt judiciary attractive to this set of critics. The only fortunate thing is that the position being canvassed as that of the NBA is nothing but the view of a few people that are fortunate to currently be at the helms of its affairs, for we have seen many lawyers have voiced opinions that support the steps President Buhari has taken.

“Buoyed by the wrong premises advanced by the PDP and NBA, a few Nigerians have also come in their personal capacities or as groups to repeat the misleading argument that the suspension of a corrupt judge is a threat to democracy. Nothing can be farther from the truth. The real danger to democracy is allowing mobster judge continue to lead the most important arm of government, for the judiciary remains the hope of the common man.

“We are also aware that some of them that hitherto were car parks and mortuary attendants in foreign lands are posturing as professional Nigerians and making contact with foreign countries to come and help  restore Justice Onnoghen, even though the breach he committed would have attracted stiff jail terms in the countries being so approached. May we educate those that have been sent on the international errand to bring opprobrium upon Nigeria that this is Nigeria addressing its internal challenges with corruption based on extant legislation. The point where other countries are being invited to come and “enforce” in Nigeria what they will not accept in their own jurisdiction.

“Had a poor civil servant or lowly officer committed this same infraction of saying they forgot to declare certain assets or bank accounts in their name they would have gotten to jail faster than it takes Justice Onnoghen to put on his wig. But a man who has lived most of his life interpreting the law is reluctant to present himself before a tribunal that has summoned him. If an everyday Nigerian behaves the same way the implications would be dire. Yet we are all clamouring for a Nigeria where we are all treated as equal before the law.

“We therefore condemn in its totality, this deliberate attempt by mischief-makers, hiding under the lie of defending democracy and in tandem with the billionaire ex-CJN to attempt criminalizing an action taken in furtherance of the anti-corruption. The dubious nature of their response to the suspension of the ex-CJN is exposed by the growing threats from these people, which border on trying to shut down the government simply because President Buhari dared to touch corruption at its very core as the judiciary had become the guaranteed for corrupt people that they can always escape the consequences of stealing from Nigerians.

“We salute the courage of President Buhari for daring to take on corruption in the judiciary even on the threshold of elections without fearing that he could lose the votes of those that may be positively disposed to keeping that arm of government corrupt. Yet we acknowledge the imperative of taking this step, which is obvious. The entire war against corruption would be meaningless if the judiciary continues to remain rotten since the conviction rate has remained dismal even though many suspected corrupt persons have been arraigned. They simply get arraigned and then initiate series of hanky-panky that means they never get convicted.

“The billionaire ex-CJN, Justice Walter was reputed to be the coordinator of sale of justice by the bench with the money found in his undeclared account said to be the proceeds of judgement procured by the likes of Senate President, Dr. Bukola Saraki, who curiously has had a case that is not too different from Justice Onnoghen’s own before the CCT. Corrupt politicians and Nigerians are aware of this and would have preferred that the status quo remain.”